When I first heard about the Venus macro lens that can go from infinity focus to 2:1 magnification, I wanted it, but it didn’t seem real and I forgot about it. After I saw Thomas Shahan’s video review and comments by other insect photographers, I ordered it. It is available in several different mounts. I got the Sony A-Mount version.

Below are two versions of the same bug. I shot the left one with my new lens, the Venus LAOWA 60mm. The right one with my less expensive old El-Nikkor enlarging lens with eBay helicoids. 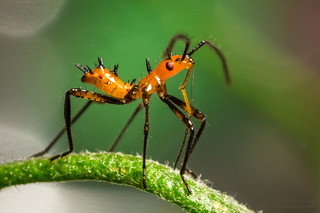 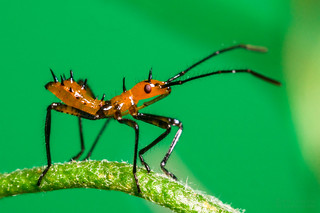 To compare the lenses, I brought the plant inside where wind would not be a variable. I averaged about 20% more missed focused shots (of around 100 shots each) at 1.25x magnification with this lens handheld. Maybe due to the extra weight of the lens. When I got the focus right, the image quality is nearly the same between lenses. The differences in background have nothing to do with the lenses.

The weight is more than I am used to when shooting macros, but not terrible. The lens is heavy and solid, it feels like my dad’s old manual lenses from the 80s. The focus distance at 2:1 is really close, about 5.5cm. My eBay lens setup (explained here with exaggerated photo) gives me 2:1 at 6.5cm. I can use camera mounted external flash with a diffuser and get decent lighting with my eBay solution. The Venus blocks nearly all the flash at 2:1 because of the wider lens and closer distance.

I have always hated being limited to shooting either extreme or regular macros so the Venus’s ability to do both is great. My enlarging lens starts at around 1.27:1 and cannot focus on anything past a few inches. Anything bigger than a honey bee and I have to change lenses.

When I first got the Venus, I missed having autofocus for when shooting larger subjects. But thanks to Sony’s Electronic Viewfinder and Focus Peaking, manual focus is pretty easy to get right most of the time. Without that, I am sure this lens would be more difficult to use. 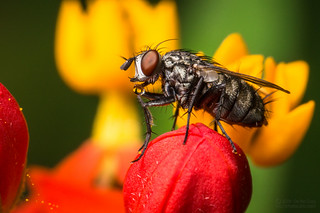 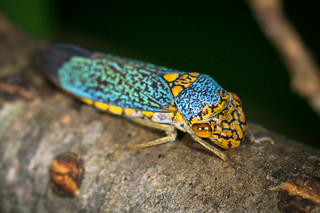 The Kuangren KX-800 Macro Twin Flash is a great companion to the Venus lens. The twin flash allows so much creativity in lighting.

The two flashes and LED are each adjustable. I have occasionally had an issue where one flash or the other doesn’t fire after a while. I have to turn that side off and on before it works again. I have also found when shooting fast, the light level of each flash isn’t always the same (when set to the same level). I presume that has to do with charging the capacitors for each flash. It is only minor variation and gives me some lighting variety to choose from in Lightroom so I am not too upset. I haven’t really noticed a pattern, but low battery levels could have something to do with both of those issues.

In the first few weeks, I accidentally popped loose one of the arm joints several times when trying to adjust too quickly. It went back in easily, but worries me. Some speculative comments on the internet I read are that the arms will wear out and won’t be user replaceable because of the wiring in the arms. This is the improved version of their flash with heavier duty arms so hopefully if I am careful it will last a long time. For me, I am not too worried about the arms because I do know how to solder. At worst, I can remove a bad segment or two and live with a shorter arm.

It is really fun to play with new lighting techniques and convenient to have that built in bright focusing LED light.

The built in LED is powerful enough to shoot without the flash at wide aperture and a bit high ISO. Its not a good light for shooting, but it could be done. It might be enough to light up your viewfinder if your aperture doesn’t get too narrow (I am usually between 5.6 and 11). Sony cameras adjusts the image brightness in the electronic viewfinder so I can see in darker conditions. I used to always use a handheld or camera “mounted” flashlight when shooting at night to find and focus on insects. I don’t need another flashlight now, I just point the camera.

I haven’t figured out a good diffuser solution for the flash. I normally always use a diffuser, but on this flash they don’t seem to be necessary for the look I want. The flash heads are so close to the subject the shadows aren’t too bad if you get power and placement balanced right. I have used styrofoam bowl diffusers and a styrofoam plate occasionally. The sago palm spirals was with a plate with a cut out for the lens. That worked but didn’t give much freedom to the flash placement. The ladybug shot used a small Styrofoam bowl for each flash. The other shots I think are all bare flash.

Build quality of this flash is nowhere near the quality of the Venus lens. Its doesn’t feel quite like cheap knock off flash. But it doesn’t feel like as high quality as a Canon or Sony flash. The button layout is a bit odd. My camera doesn’t even realize I have a flash attached so I must shoot in Manual mode to get the proper shutter speed and I have to manually set the white balance. But for the price, and especially since no one else makes anything like it, I can live with the issues. It is far from perfect, but it’s closer to perfect for me than any other. It has really changed the way I shoot. Mostly in good ways.

Update: I am still very happy with the Venus lens. It is on my camera most all the time unless I have some special need (telephoto or wide). After months of use, the Twin Flash died on me due to an issue with Sony’s hotshoe. I sent it back to the manufacturer and got a replacement. They now have a suggested/required adapter for some (all?) Sony cameras to prevent this problem. A week after I got the replacement (which had improved display and controls), I stupidly tried to use it without the adapter which I forgot at home. The other one had worked for months before it went bad so I took the risk. That was a bad idea. Venus said they would replace it again, but since it was my fault I didn’t send it back. I really miss it and will order another one soon. I have been putting it off for a while, hoping they would improve the design some more.

When I got my replacement and the adapter, I also ordered a set of diffusers from their website. They work, but I was not impressed. I don’t have a better suggestion, but it is not really the quality custom solution I hoped they would be. They connect with Velcro and have crudely cut holes to fit around the arms.